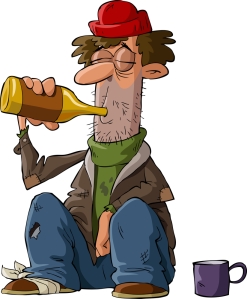 My brother, Larry, and I were taking the long subway ride home to Manhattan from Queens when I realized, there should be a list of rules for novice subway riders.

Larry and I jump on the train and, after standing for a stop or two, manage to squeeze into two seats in the middle of the car.  Immediately my eyes begin their midwestern trait of looking around.  This is not, as my brother has told me many times, a good idea.

I look directly across from me, where I discover the most impressive Dolly Parton breasts I’ve ever seen.  I stare (much longer than appropriate) at the woman’s massive cleavage and eventually raise my gaze to her, quite angry, face.

Blushing, I shift my eyes to the left, toward a young man playing an accordion.  I then break the one unwritten rule I’m aware of: Do not make eye contact.  Beads of sweat break out on my forehead as I realize he is headed my way, ready for a private serenade.

Whipping my head to the right, I focus in on a pile of filthy rags resting on a bench seat, entirely free of any passengers.  The rags are moving back and forth, rhythmically and I realize it is a man.  My eyes focus in on the Picasso-esque structure as I try to sort it out.  There’s his leg, his arm, but where’s his hand?  ACK!  I realize the rhythm of his movements coincide with an exercise my mother said was certain to make me go blind.  Involuntarily my eyes meet his and he grins.

Sweating and blushing, I scrutinize the ceiling of the train, where I read each and every advertisement, attempting to polish up my Spanish by comparing it to the English language advertisement beside it.

I breathe easier now, knowing I’ve figured out the correct subway stare.   My gaze leaps from the signage on one side of the door to the other and lands on a smile so bright I have to blink to keep from being hypnotized.

The handsome young man, who obviously stepped right out of an Abercrombie and Fitch ad, expands his smile and nods his head.  I feel like we’ve made a connection and we’re quietly laughing at all the kooky people on the subway.

At the next stop he lets go of the overhead bar and walks my way.  Mesmerized by his teeth, I flash him a smile which quickly turns into a frown as he moves one step past me, to talk to my brother, Larry.

I spend the rest of the trip staring at my shoes wondering if I’ll need to polish them before I go home, and compiling a list of rules for a novice subway rider.

Rules for the Novice Subway Rider.

And, here’s a rule that pretty much applies anywhere in life.

If you see a pile of Picasso-esque brown rags – move in the opposite direction, before you go blind.

On the right side of this page is a picture of my new book.  Click on it, and then, maybe buy it?  I’m trying to earn enough money to taxis the next time I’m in New York.

6 thoughts on “RULES FOR THE NOVICE SUBWAY RIDER”