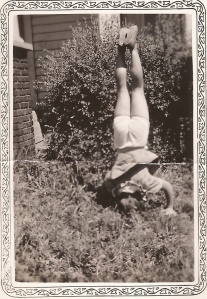 No, this isn’t a picture I discovered on the internet. I found it in a box of family photos. It’s my Aunt Betty Lou in front of the house where she grew up…the house where I grew up.

I call it Crazie Town central…where our residents work hard to conform to the constitution formulated by my grandparents’ generation.

There are a lot of stories about Great Uncle Fats, but this is a favorite.  He was driving a grain truck so overloaded, that when he tried to go up a steep incline, the front tires lifted off the road.  He rolled the truck back down the hill and when he got the vehicle moving forward, had his eight-year-old nephew slide over to drive while he crawled out of the still-moving vehicle to sit on the hood.  According to the child (my dad) it worked.

The odd shape of Crazie Town’s borders can be attributed to the fact that when my Grandma Irma inherited her share of her father’s land, Great Uncle Henry had a fit.  He “yelled so loud, you could hear him all the way down Kansas Avenue.”  When his screaming didn’t work, he opened the lawyer’s window and threatened to jump.  Even though it was barely ten feet to the sidewalk, his sister conceded and gave him the extra acres he wanted.

On important holidays, Mom drove into town and picked up Great Auntie M.   She had a mole the size of an olive on her nose.  She thought coffee was bad for you so she sipped at a mug of hot water with cream and sugar the whole time chain smoking packs of cigarettes, always careful to slide each one into her foot-long gold-tipped  cigarette holder before she lit it.

My Dad and his generation proudly continued the cultivation of their eccentricities.  Instead of walking out to his mailbox each day (a distance of 20 yards) Lewie got in his car and drove.  He wore glasses but they were too tight on his head so he would clamp them on the outside of his ears.  In his later years we built him a new home with central air and a thermostat he loved to play with.  In the summer I’d walk in to see him sitting in his rocker in front of the TV wearing sweatpants and a flannel shirt.  In winter I’d likely find him in shorts and t-shirt.

It’s looking hopeful that the next generation will carry on with our Crazie Town traditions.   A friend of mine recently reminded me of the story of her last visit to the farm.

“Remember when your nephew ran through the house with a flaming propane tank?” she asked.   Of course I do.

We were preparing for a bonfire, even though it was a little too windy to do so safely.  My nephew planned to start the fire with the flame from a hand-held propane torch, which he wisely lit inside the house.  Unfortunately the tank had a leak so flames shot out from the side.  With everyone screaming directions at him he finally sprinted out the back door and tossed it into the pasture south of the house.  Of course, the grass caught on fire.  He hurried back to the house and grabbed the hose.  He dashed toward the fire but was yanked off his feet when the length of hose ran out twenty-five feet from the flames.

I can tell you, as the Mayor of Crazie Town, that was a proud moment.

Have you subscribed?  Not yet?  Well, hurry up, because the town is filling up fast!

12 thoughts on “The Crazie Town Constitution.”