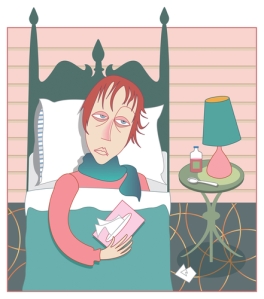 I feel really guilty for not posting to my blog for two weeks, but I’b been sick wid a code.

And since I’ve had nothing to do but lie around thinking about ways to make myself more miserable I’m going to share some of my worst thoughts.

When I was a kid, I remember Mom sitting beside me keeping a cool rag on my head as I moaned in pain from strep throat or holding my hair back as I threw up.  She was that kind of parent.

Unfortunately for my son, I was not that kind of parent.  As I’ve said here before, if you’re ever in need of medical care – don’t call me.  While Phineas leaned over the toilet spilling his tiny guts, I’d be in the hallway calling out “Poor baby!  I’m sorry! [gag] Let me know when you’re done.”

Which reminds me of another miserable memory of my first attempt at drinking. I consumed an entire pint of peppermint schnapps.  My boyfriend – later to be my husband and even later to be my ex-husband — was afraid to be caught by my parents so he pushed me through the front door, ran back to his car and drove home.  I’m told I spent the rest of the evening worshiping the porcelain throne (as my dad called it), but I can’t say I remember it.

The next day, Dad sat me down in the living room.  He’d set up a TV tray in front of him with a blue Tupperware tumbler and a glass.  Picking up the tumbler he said, “You know, Teresa, some people’s bodies are like this plastic cup.”  He threw the cup across the room where it bounced off the fireplace, sounding in my alcohol soaked brain like cannon fire. “They can do whatever they want to their bodies and they will be fine.”  Then he picked up the glass. “You? You’re more like this.  If I throw this glass, it’s going to shatter. Is that what you want to do with your life, Teresa? Shatter it?” I was so thankful for his great advice; I ran to the bathroom and threw up.

And here’s another story to prove my wretchedness.   When Phineas was in his first year of college he came home complaining of stomach pains.  Assuming he’d experienced an evening much like the one I described above, I put him in bed and left town.  He called several hours later to say the pain was worse. I called my good friend, Sharon, explaining that Phineas was probably just hung over, but could she go check on him.  A call from her confirmed that she believed he was very ill.  In fact, she was driving him to the emergency room.  When I arrived, the doctor took me into the hall to say that Phineas was suffering from appendicitis and that immediate surgery was required.

Here’s where I wish I could tell you my sweet mother inhabited my body and showed me what to do.  Instead, The World’s Worst Mother spent ten minutes trying to convince the doctor that Phineas had a really low tolerance for pain and he’d be fine.

Fortunately for me, the doctor ignored my motherly unconcern and took my son in to surgery, where they removed his appendix right before it ruptured.

Why am I sharing these horrible stories about myself? Because I feel guilty – REALLY GUILTY – for not writing my blog for two weeks and, as every good Catholic knows, penance is the only way to a guilt-free life. Besides, you wouldn’t have read this if I’d printed three Hail Mary’s and two Our Father’s, would you?