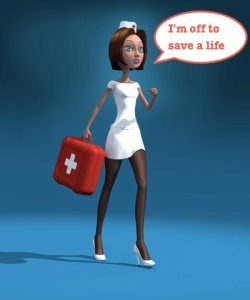 If there’s an emergency, I’m there. That is to say, I want to be there, but most probably you’ll find me elsewhere. There’s something about that instant, when calmer heads should prevail, that makes me want to do an Usain and bolt.

I found this picture on the internet and I’m a little afraid they used an actual image of me from several years ago as their model (although I don’t think I’d ever really wear white cowboy boots.)

The office where I worked had a fire – a paper warehouse – yes, scary, right? When the alarm went off, I dropped the phone receiver, picked up my purse, and ran down the stairs. I’m pretty sure I knocked a grey-haired old lady down on my way.

When my son, Phinias, was little, he got burned by…well, by me actually. I was making spaghetti and just as I carried the boiling water to the sink, he did that toddler thing where they grab both your legs in a vice grip.  Later, in the emergency room, when they asked him what happened, he said, “My mom poured boiling water on me.”  Which was kinda true so then it took several hours with a social worker for me to retrieve Phinias.

Anyway, I was supposed to change his bandages every day and put salve on the burns.  I tried.  Really I did.  But I just couldn’t do it without gagging.  So, I did what any grown woman would have done in the same instance – I called my Daddy.  We both drove the 30 miles every night to meet up at the Lawrence turnpike rest stop where Dad (fondly referred to by his children as Dr. Quack) took Phinias away and returned him fifteen minutes later all set to go.

I’m not too good with the sight of blood either.  The first time I watched the lab technician fill a vial, I fell out of my chair in a dead faint.  Regrettably, the nurse was one of the few grown people shorter than me and I managed to land right on top of her.

Last year, while working in my garden, I sliced my finger with my pruning shears.  Thanks to a lifetime of emergency medical treatment by Dr. Quack, I knew that I’d need to wash the dirt out of the cut.  Unfortunately, every time I stood at the sink to run water over it, the room began to spin. I’d stumble to the nearest chair and lower my head between my knees.  When the room settled into place I’d try the sink again, which only landed me back on the chair trying to stay conscious. It reminds me of this episode from Frasier when Niles has a similar experience.

On second thought, maybe you ought to call someone else.

6 thoughts on “In Case of Emergency, Call Me…Unless…”