I am back in Crazie Town after a whirlwind trip to New York City. 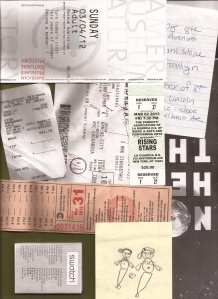 I cleaned out my purse when I got home and here’s what I found.

**Boarding pass for the flight where I’m pretty sure I slept so hard I drooled on myself.

**My ticket stub to Rising Stars.  The Laguardia High School for the Arts annual talent show.  It was AMAZing.  One guy came on stage and played guitar like I’ve never seen. He transported himself and the audience to another space and time.  And, oh yeah, he’s 15 and he’s going to Laguardia for his art, he just plays the guitar for fun.

**A shuttle pass to get me from one subway station to another.  The “L” was closed for the weekend and I was trying to get to Brooklyn to visit one of my brothers.  I was with a friend who valiantly attempted over and over again to get us there on the subway but we finally bailed and climbed into a cab.

We gave him the address and he said “Where’s that?”

**The receipt for the craziest most useless watch I’ve ever purchased.

**Drawing of me and said niece as mermaids.

**Restaurant receipt for a local diner where I ended up eating breakfast twice in one day. Once at 9 am and once at midnight.

**Hand written directions for a car service.  I seem to have the worse Car Karma ever.  My friend told me she’d ordered a car for me to take me to the film site where my brother was shooting Person of Interest.

“No problem,” she said.  “They know where it is and they have GPS if they get lost.”

I climb into the waiting (GPS free) car and the first words of broken English out of his mouth were.  “Where are we going?”  Thank goodness for smart phones as I looked up the location on the internet and wrote them out for him.  He was so diligent about taking me to the exact address that he drove onto the set to let me out.

**The program for Now.Here.This.  Another brother is the musical director of this Off-Broadway play and I got to attend the first preview of it.  Not to brag, but it was the best musically directed play I’ve ever seen.

In between all of this, I walked approximately 400 miles of concrete sidewalks, I changed sleeping quarters five times, I learned how to take the subway all by myself and, sadly, I discovered a book about monsters that appears to be almost an exact duplicate of the children’s book I’ve been working on for two years.

It was a wild ride and although I loved every minute of it, I am happy to be home where I can look out my office window and see green grass, where I can drive my car the 50 yards from one store to the other, and yes, my dear friends at WTF Critique group, where I can finish the last few paragraphs of my book.