I drove the sixty miles to Crazie Town this weekend to visit my Aunt Betty Lou at the nursing home. When I pushed open her hospital door, she was asleep, curled up underneath a tattered K-State throw.

I touched her shoulder and said, “Hi, Aunt Betty Lou.” And, because I’m never certain she’ll know who I am, I added, “It’s Teresa.”

She lifted her head, blinked twice and said (as if we’d seen each other a day ago,) “Hi! We’re on our way to the grocery store. Want to come with?”

Evidently this visit we’re going to be living in 1999.

“Help me put on my shoes.” She sat up, dangling her legs over the edge of the bed. “Of course, you’ll have to drive because I don’t have a license any more.”

Our conversation had just jumped to 2013, because up until the time she moved to the nursing home, she had a license.

I helped her into her wheelchair. “Of course I’ll drive,” I said.

“Honey, don’t forget my glasses. They’re on the dresser.” She pointed to the empty space next to the head of her bed.

I glanced at the swivel hospital tray at the foot of her bed. “I don’t see them.”

“Well, that’s where I always put them.”

I looked around her tiny room. “Here they are, next to your sink.”

She looked at me like I was crazy – suggesting there was a sink in her bedroom. 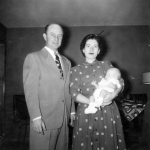 Aunt Betty Lou had never had any children. Up until 1999, she and her husband, Harold, lived in a tiny wooden home that was frozen in 1951 – the year they married.

From a child all the way through adulthood, I remember walking into their narrow house, through their living room (with the mid-century modern nubby green couch) and past the formal dining room (perpetually covered with a starched tablecloth,) into the kitchen.

I’d sit down in one of the red vinyl-covered chrome chairs at the boomerang patterned Formica table and Uncle Harold would offer to cook me whatever I wanted. “Eggs and bacon? No? How about some fried chicken? I was just getting ready to make some.”

While he ran through his repertoire of menu items, Aunt Betty Lou would fill an aqua blue aluminum tumbler with milk, put three cookies on a matching melmac plate and place them in front of me.

Unable to sell me on any of the Carte du jour, Uncle Harold waited until Aunt Betty Lou was out of the room and then refilled my plate with more cookies.

Twenty years ago Uncle Harold suffered a stroke and although he survived, he changed into a gruff, stingy old man. After that, Aunt Betty Lou lived in the bottom of a bottle of gin. She kept her stash out in the detached garage. One wintery day she slipped on the ice and lay there for several hours until Uncle Harold got hungry enough to go looking for her.

They moved to the nursing home together where Betty Lou joined Harold in the Cranky Old People Club. A few years ago Uncle Harold passed away and because I still remember the aunt of my youth, I try to make the drive to visit her every other week.

Lately, I haven’t made the commitment and now it’s been several weeks since I’ve been to see her.

I pushed her wheelchair up and down the halls of the nursing home hoping she’d forget about our imaginary trip to the grocery store.

“Will I need a coat?” Aunt Betty Lou looked up at me through her oversized glasses.

“Is John getting the car?” she asked.

I paused, struggling for a good answer. “Maybe,” I stuttered. “Maybe, we should stay here because…because there’s a big snow storm going on outside.”

We sat in the waiting room and she asked “ Have Aunt Lorena and Uncle Henry been able to get out of their house yet?”

Uncle Henry has been dead for 60 years.

“Um. Why would Aunt Lorena and Uncle Henry be stuck in their house?” I asked.

Aunt Betty Lou gave me the “Are You Crazy?” look again. “Because of the snow storm.”

“Oh, right. Yep. They’ve been able to get out.” Including a bit of color commentary to my performance, I added, “The snowplow came through today.”

Staring at the ceiling I struggled to come up with an appropriate reply. Had our conversation moved so far into the past that snowplows hadn’t been invented yet?

I wheeled her down the long hall, slipped off her shoes and arranged her in bed. Lifting the K-State blanket into the air, I let it settle over her tiny body.

“This was your dad’s,” she said, smoothing the fabric over her legs

“Yes, that’s right.” I smiled, realizing she was back in the present. I pulled up a chair thinking we’d be able to have a pleasant conversation. “Remember when Dad got that?”

Aunt Betty Lou patted my knee. “Honey, I want you to get home before the roads get too bad from the snow.” She took off her glasses, handed them to me and closed her eyes.