If you could crack open my crazy head, you’d be surprised what you’d find. Well, maybe the lifelong residents of Crazie Town wouldn’t, but you new guys? You’d be surprised.

For example, a few years ago, I experienced a bout of depression. Nothing super-serious, like requiring the purchase of a straight jacket or anything. Just an overwhelming feeling of listlessness.

It started when I had trouble getting out of bed in the morning. Wandering around the house in my pajamas, I took long naps in the afternoon and most of my sentences were barely intelligible.

“Feeling better?” My husband, John, asked each day as he picked up the plethora of snotty tissues from around the vault I’d built in our bed.

“Any chance you want something for dinner?”

“Maybe we could take a walk. Some fresh air will do you good.”

Spending my day in the bed went on long enough for me to hone my listening skills to sonar submarine levels. The moment I heard the back door open, indicating that John was home, I jumped out of bed. 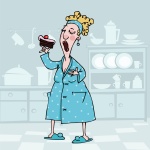 Smoothing the covers, I’d run to the bathroom to flush the toilet and pull my robe tight as he walked in the room.

One day I looked in the mirror to see, on the lapel of my bathrobe, last week’s Chinese take out next to a blob of chocolate frosting I’d had for breakfast. I stared up at the ceiling trying to remember the last time I’d taken a shower.

My bossy voice spoke up — the one that knows what everyone around me should and shouldn’t be doing. Only, this time she was talking to me and insisting that I march into the shower and start scrubbing.

As I stood under the scorching water, I sighed with contentment – happy to be stripping off the layers of grime. But, somewhere along the line – after I’d rinsed and re-rinsed the shampoo from my hair – I realized I couldn’t leave the shower.

“Of course you can,” Bossy Voice said.” Just turn off the water and step out.”

I pictured myself reaching for the faucet handles and then … well, that was the problem. The thought of the exertion it would take to dry myself off was just too overwhelming.
I remained in the shower while the water changed from hot to tepid. Even knowing that within minutes the water would be freezing, I stood there, postponing the gargantuan task of towel drying.

“You’re being ridiculous,” Bossy Voice chastised me. “And, you’ll be sorry when that cold water hits you.”

“I’m fine,” I whined. The first pellets of ice pummeled my skin and I yelped. Leaping out of the shower I decided I would always listen to Bossy Voice.

Wrapped in a towel, I pulled on my filthy bathrobe, crawled under the covers and slept until I heard the back door open.

Bossy Voice told me to show John I could get out of bed.

“Uh-uh,” I mumbled forgetting my commitment to Bossy Voice. I rolled over, pulling the covers around my head.

John peeled back a layer of blanket and whispered, “It’s a beautiful day outside. Maybe a drive would cheer you up.”

“I’ll get you a hot fudge sundae,” he wheedled.

I rolled over and cracked an eye-lid. “With nuts?”

My eyelid clamped shut. “Don’t like whipped cream.” I started to roll away from him.

Keeping my eyes shut I said, “Did you just call me extra nuts?”

“Kidding,” I said, opening my eyes.

He clasped my hand and gave it a tug. “Come on!” He pulled me through the house, toward the garage.