Eight years younger than me.

If you’ve lost track of who’s who, click here. 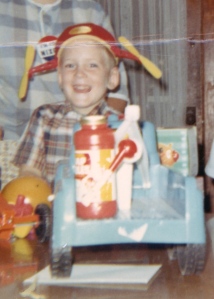 Though the drama gene skipped over my younger brother Rick, it hit little brother John with a vengeance.

Every day, some “emergency” required shrieks of help. Most likely he required someone to open a box of cereal or maybe find a favorite toy.

The entire family ignored him.

Mom and I looked out the kitchen window.

That don’t have this ride at Disney World.

John crouched next to a rusted disc, a piece of farm equipment covered in sharp metal saucers used for cutting through the soil.

His yelling continued while he motioned frantically for us to come outside.

Mom groaned. “Teresa, go out and tell him to pipe down.”

“Hold your horses!” I shouted, and slowly sauntered over to his rocking body. “What’s the big emergency now?”

He flopped back in the grass and moaned, “Help me.”

Blood oozed from a gash the length of his calf. Struggling to keep myself from fainting at the sight, I assisted him inside where Mom wrapped a dish towel around his leg to stem the flow.

Since a weekend didn’t go by without one of us falling out of a tree or running into a barbed wire fence, ER trips were common events. Between us, I can count at least five broken arms and one broken leg, not to mention dozens of stitches.

The weekend before John’s accident, Mom had snatched up one of her children and marched out of the hospital when an uninformed doctor tried to tell her “Vicks does nothing except make the kid slippery and hard to hold.”

She inspected John’s cut to see if  it qualified for an emergency room visit. With a heavy sigh, Mom turned to big brother and said, “Put him in the car.”   Mike scooped John into his arms and I held the back door open while Mom went to grab her purse.

Mike started down the concrete steps and then he stumbled, tossing John into the air.  The two of them landed with a thud. When the dust cloud settled, a coffee can lay on it’s side, the moist dirt spread in a circle and the surviving worms slinking away, escaping their fate as fish bait.

“Who left this can of worms on the step?” Mom shouted. I would have answered, but I was too busy high-tailing it to the barn.

Even into adulthood, John’ss the one of us that continues to be an emergency room regular.

A cracked rib when a dune buggy flipped over on top of him.

Unconscious from a prolonged 104 degree fever.

And one night in a Mexican hospital when, too lazy to walk around his hotel bed, he’d decided to jump across it, cracking his head open on the ceiling beam.

So, now when he calls for help, I listen. Well, most of the time anyway.

6 thoughts on “The Drama Gene Hit Little Brother with a Vengeance.”