I’ve spent the last few weeks talking about the four Big Kids from Crazie Town, now it’s time to talk about our little ones. 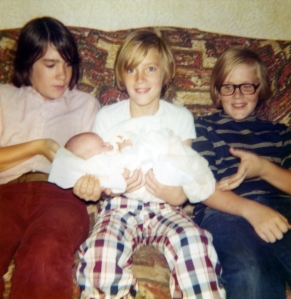 The Little Kids: Tom, John, Rick – and our latecomer, Craig

The biggest of the Little Kids is Tom, Sibling #5 (four years younger than me.)

Tom was the smartest in our group. He had an engineer’s mind, always rigging up some sort of gadget.

Mike and I built our forts out of dead limbs propped up against a tree and we installed security by tacking up a sign that read “No Little Kids Allowed.”

Tom built his with lumber and large sheets of rusted tin that had fallen off the roof of the barn. He enlisted the other little kids and they eventually added a working fireplace and then built a bridge across the creek. He retaliated to our security system by booby trapping the path to The Little Kids fort, burying upturned nails along the trail. Unless you knew the right way to go, you’d be limping home.

The aforementioned fireplace was strictly forbidden by our mother – No Fires Ever! Tom realized the smoke on his clothing gave him away, so when he came home from fire building he cleverly threw his clothes directly into the washer.  Although smarter than us, he wasn’t smarter than Mom, who knew the only time her kids did their own wash was if they’d done something wrong. Finding Dad’s missing Zippo lighter in the bottom of the washer was also a good clue.

My entire childhood, a carved wooden paddle from Dad’s fraternity hung on the wall in the dining room. If we kids acted up too much, Dad would holler “Don’t make me get the paddle!” He never once took it off the wall, (in fact, we were never spanked) but we believed that this would be the time he finally did.

Dad had a unique way of disciplining children. I remember a rainy summer evening. My older sister and brother were fighting over who got to ride the trike on the covered porch. They were going at it pretty good and Dad was tired of it — probably the wild kingdom noises coming through the window disturbed him watching The Wild Kingdom on television. Anyway, he marched out to the porch and said, “That’s it!” He put Janet at one end of the kitchen table and Mike at the other, gave them both knives and said “You two want to kill each other – do it right.” And then, stomped back to the living room and turned up the volume on the television.

But, I digress. This is Tom’s story.

He was the one kid in our family not intimidated by our parents threats of bodily harm.

One morning as Dad tried to wrangle half a dozen kids through breakfast, getting ready for school and on the bus, Tom refused to get out of bed. Dad, frustrated beyond the breaking point, shouted “Wake Up!” and threw the pancake spatula against The Little Kid’s bedroom wall.  There was dead silence as we waited to see Tom come stumbling into the kitchen. Instead, the spatula flew back out of the room, taking off the top two inches of Mom’s beehive hairdo.

I can’t tell you what happened next. Not because it’s too horrible for words, it probably was, but because before that spatula hit the floor I was out the door and running to the end of the driveway to wait for the bus.